You are here: Home / Uncategorized / The journey from seeker to master 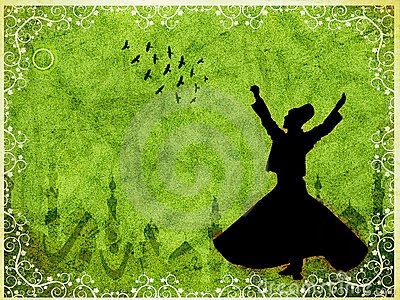 I was in Berlin in June, for The Global Presencing Forum, for the last module of the Theory U masterclass and to spend some time exploring the city. This city holds so many paradoxes. As fascinating as painful.

I read, in Happinez magazine, about a little parfumshop in Charlottenburg, where they still create their own fragrances.
On the last day of my stay in Berlin, I visited the shop.

When I entered the shop, I noticed a sacredness in the air, I immediately started whispering, as if I entered a temple.
There were some pictures on the wall of men wearing a turban.
A woman showed me around, explaining the different products (perfumes, eau de toilette, incense, candles, …). My attention was caught by a bookshelf in a corner. They were books on Sufism.

I expressed my interest in Sufism, and asked some questions. All of a sudden a man appeared from the back of the shop. We talked a little, he was the creator of the parfums. He explained that he used to have a room behind the shop where they organised Sufi gatherings, but it recently moved to another place because of lack of space.

After a while, he walked up to the perfumes, there were hundreds of little bottles, all the same design, carrying beautifull names and having all possible shades of yellow, orange & brown.  He looked at me and then took out one specific bottle, called Kashmir. He gave to me and said, “I think this is the fragrance for you”. I smelled it, I loved it and I accepted his choice without any question.

Walking out of the shop, I realised that I had just been in the presence of a Sufi master.

And that took me back to the time I spent in Konya, with my friends from the Caravanserai, in December 2009. Rumi’s wisdom was at the centre of our relationship and that’s why we gathered in Konya during the Rumi festival.

I experienced the journey of the 3 rooms.
The first room is a shop, where an exchange takes place. Often a carpet shop, selling carpets, in which the Sufi symbols are woven into.
People come in to buy a carpet, and the ‘salesman’ showes them around. Sometimes it’s only an economical transaction and people leave with a carpet. Other times a conversation unfolds about the symbology. The salesman becomes a teacher. He might invite you in for tea, that’s where you enter the second room.

We experienced that in Konya, as a group, thanks to the presence of three of our friends, from Iran & Afghanistan, they spoke Farsi and had a lineage with Sufism.
We spent many hours at the back of the shop, drinking tea and having conversations. After a couple of days we received an invitation to join a Zikr.

The Living Wholeness Institute describes the 3 rooms in a beautiful way:

“The journey from seeker to master in the Sufi tradition:
Rumi writes that there are three levels of spiritual engagement with life. The first level is based on exchange (Maslahat), a trade.
The second level is the level of knower (Ma’arefat). One engages more fully with life to access a deeper level of knowing. It is beyond exchange; one doesn’t provide in order to get something back, but rather because it is time and it is your job.
The third level (Tajrobat) is based on oneness. Rumi describes it as going beyond hearing, seeing and tasting it. You become it.”

The first room holds & shows the essence, it’s the visible & tangible manifestation of the other rooms. (all the carpets carry the symbology)
It’s a gateway.

In Greece, my friend Kamyar & I, tried to look at our work from that perspective.
Designing our work & learning from the perspective of the different rooms.
I got so much clarity about the why & how & what.
New meaning emerged.

Go back to blog
0 replies

I am because we are Nice “coincidental” encounter